Collaboration Cobra in a Jar

Cobra in a Jar

Q: Okay here’s another question. Why does Hannah go for high schoolers to build her evil snake army instead of something like the government or the actual army?

Also, this show would be so much scarier if Hannah went for little kids. Like a parent walks into the preschool class and they’re all hanging out AND TALKING IN UNISON NOPE NOPE NOPE

Katie: Children are the future. Also, high school is when stress really starts to enter the equation and makes the students vulnerable. I think Hannah would need a different pitch for younger kids, because little kids don’t really have a grasp in the future or believe in excellence.

Also, I think high schoolers are a soft target, as it were. Somebody would probably notice infiltration of more important institutions…

Rob: Excellent high school students often score excellent internships at places like, oh I don’t know, the State Department. I could also see a case being made that there were other surviving cobras who have other targets, and Hannah was assigned the Upcoming Generation. Also: plenty of conspiracy theory websites and YouTube videos will tell you that the government is already run by reptilians.
Our usual practice with bookwriting has been to make a fairly detailed structural outline, determine where the songs go, and then proceed to songwriting. Once the score is done or mostly done, we write the scenes. Usually one or the other of us does the first pass at a scene, and then we edit /rewrite together.

In this case, we knew it would be wise to come up with a book draft sooner than we might ordinarily, since there was a company of performers waiting to find out just what exactly was in this show.

When I (Rob) write a draft, I like to read over the notes — and then get highly caffeinated and just plow through as much as I can. Usually I’ll get up at 4 or 5 am to do it, and make use of that semi-dream state of the early morning — when your natural creativity hasn’t been cluttered up by the normal events of the day. I zoomed through the first act in about six hours — then I took about an hour-long walk, came back and did the second act in about two and a half hours. This was only possible of course because we had talked through the show so many times.

Almost immediately we knew there were things that would evolve: in one classroom scene, I needed Woodchuck to be talking about some historical event he had detailed knowledge of. I randomly chose World War I. In talking about it afterward, Katie brought up the fact that we wanted to address the theme of “the necessity of failure” as a natural part of life & education. Thomas Edison has a lot of great quotes relating to failure — so we decided that Woodchuck probably idolized Thomas Edison. It might even become a song.

“I have not failed. I’ve just found 10,000 ways that won’t work.”
“Just because something doesn’t do what you planned it to do doesn’t mean it’s useless.”
“When you have exhausted all possibilities, remember this – you haven’t.”
“Our greatest weakness lies in giving up. The most certain way to succeed is always to try just one more time.”

We had also talked about the idea of Rikki being a comic-book artist/creating graphic novels — and maybe even creating a “Kelly the Destroyer” character. We knew that after Rikki is taken by the cobras, when Kelly is at her lowest point, that Kelly would probably have one of Rikki’s comics — really bringing home the stakes involved.

In the heat of the moment of pushing through to get a whole draft on paper, I had forgotten about this (it was in a separate note!) But this is what rewrites are for — sharpening and focusing the character detail.

I did make a discovery during the draft — almost all the adult characters appeared twice or three times, except for the literature teacher Hawkins. It struck me, as I was at the point where Kelly is at the point of despair, that Hawkins could come back to give comfort and inspiration — and talk a bit about Kali the Destroyer and what she means.

In Joseph Campbell “hero’s journey” terms, bringing Hawkins back is the “meeting with the mentor.” Then there will likely be a song which is “Kelly’s resurrection”, where she regains her confidence and strength for the final battle.
On August 4th, after seeing one of the original Springfield cobras preserved in formaldehyde, we decided to go to the zoo to observe living snakes — and perhaps be inspired by snake behavior.

Dickerson Park Zoo in Springfield has a variety of snakes in its reptile house, including a monocled cobra. It wasn’t very energetic the afternoon we came to visit. 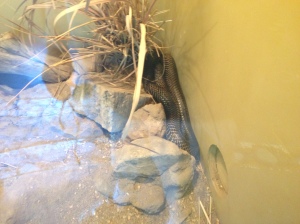 On August 4th, after seeing one of the original Springfield cobras preserved in formaldehyde, we decided to go to the zoo to observe living snakes — and perhaps be inspired by snake behavior.

Dickerson Park Zoo in Springfield has a variety of snakes in its reptile house, including a monocled cobra. It wasn’t very energetic the afternoon we came to visit.

On the 4th of August, Katie and Rob visited Drury University in Springfield, Missouri, where the only remaining cobra specimen from the 1953 Cobra Scare is kept. There’s a display case with news clippings, magazine articles, and of course the cobra — preserved in formaldehyde in a jar. 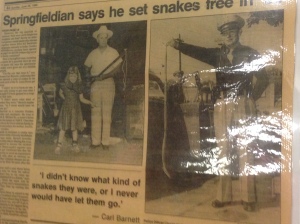 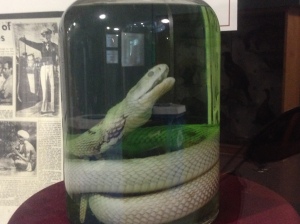 The caption says “The Last of Its Kind.” Of course, they didn’t know Hannah had escaped…